***CLICK ON THE TOPIC HEADER TO EXPAND THE DETAILS***

Sign the Jail Letter on the Riveters Collective Page

Description: The Riveters Collective board voted last week to endorse the “Vote NO on the Jail Ballot Measure” campaign. We drafted a letter to local council members, and we’d love to have you co-sign.

Background: Read the article from the Slate Federal Court: Public Officials Cannot Block Social Media Users Because of Their Criticism.

Background: The people of Tacoma mobilized and united to fight the proposed methanol refinery. NWIW withdrew that proposal. We can see to it that the same happens with the Puget Sound Energy LNG proposal.

Suggested Script: Dear Ms. Schultz, It is imperative that a supplemental EIS (SEIS) be opened for Puget Sound Energy’s proposed $275 million liquefied natural gas (LNG) facility planned for the Port of Tacoma. The plan for the LNG project has changed substantially since PSE submitted its proposal and the City of Tacoma conducted the initial EIS. It is important that citizens have an opportunity to evaluate and comment on these issues not addressed in the EIS: PSE will now use the Blair Waterway instead of the Hylebos. Truck traffic will increase due to PSE’s evolving transport plans. Arrangements to reopen the fire station in the port may not be feasible for long-term operation. Safety regarding the 8 million gallon LNG production, distribution, and storage facility has not been released due to lawsuits pushed by PSE to keep the information secret from the public. These changes pose new risks and will have their own environmental impacts that merit proper assessment. I am asking The City of Tacoma, as the lead agency in the State Environmental Policy Act (SEPA), to suspend all permitting processes, including demolition permits, until the above issues can be addressed and resolved. Please keep me apprised of new developments. Thank you for your consideration.

Description: Governor Inslee makes the final decision on the Vancouver oil terminal, and carries significant influence over the Kalama methanol refinery. Ask him to back up his commitment to climate action, and keep fossil fuel infrastructure projects out of our state!

Suggested Script: Dear Governor Inslee, I would like to thank you for your bold climate leadership in committing Washington to the Paris Accord. Now, more than ever, we need climate leaders like you to safeguard our planet from catastrophic climate change. Right now, two giant fossil fuel terminals along the Columbia River are threatening our state. I urge you to do whatever is in your power to stop both the Tesoro-Savage oil export terminal in Vancouver, and the Northwest Innovation Works fracked gas refinery and methanol export terminal in Kalama. The Vancouver oil terminal proposed by Tesoro-Savage would be the largest in North America, bringing up to 5 more oil trains through the Columbia River Gorge, and committing our state to decades of fossil fuels. Please stand up for the health and safety of communities along the rail line by rejecting this proposal. The Kalama methanol refinery would be the largest in the World, consuming more fracked gas than any sector in our state’s economy, and opening the floodgates for fracked gas usage in Washington. Not only would this refinery greatly increase our state’s contribution to global warming, it would also rationalize pipeline expansions which will bring more fracked gas refining, burning, and usage. This refinery will lock us into decades of fossil fuel use, at a time when we need to keep all fossil fuels in the ground. Please stand with climate activists across the state, and take a public position against this refinery.

Description: Help Puget Sound Energy (PSE) go coal-free by submitting a comment to the Washington Utilities and Transportation Commission and PSE CEO Kimberly Harris asking that PSE retire the Colstrip Coal-fired power plant by 2025 and commit to 100% renewable and energy-efficient replacements with no new natural gas.

Background: While the majority of energy for PSE comes from hydroelectric dams, the utility that powers Whatcom County still gets about 32% of its electricity from coal-fired power plants. PSE is the primary owner of one of the largest remaining and dirtiest coal-fired power plants in the Western United States, the Colstrip Generating Facility in Colstrip, Montana.  The facility is the 3rd-biggest polluter in the U.S.  Your voice as a PSE ratepayer can make a difference over whether or not a highly polluting coal-fired facility continues to provide energy for Washington state homes and businesses, or if we move past this outdated fuel source to cleaner, smarter, and more innovative means of meeting our basic needs.

Suggested Script: As a concerned Washington resident, I urge you to retire the Colstrip Coal-fired power plant by 2025 and commit to 100% renewable and energy-efficient replacements with no new natural gas. We have a choice to make — dump hundreds of millions of dollars of our hard earned money into an outdated, out-of-state coal plant or invest that money right here in Washington and throughout the region building energy efficiency and renewable energy solutions that will create thousands of well-paying jobs, improve public health, and significantly cut carbon pollution. All across the country, communities and utilities have declared that coal is too costly and risky for ratepayers, including Portland General Electric and TransAlta here in the Northwest. More than 200 coal plants are slated to retire. It is time to develop a plan to transition off coal and to invest in clean energy for the benefit of ratepayers, our local economy, and our children’s future.

Vote in the Primary Election

Description: Several local races have primary elections (county council districts 2 and 3, city council at-large, and port districts 1 and 2), top two candidates move to the general. The RC held a thorough, transparent, and as-fair-as-possible process for endorsing candidates. Want to know what we asked and how candidates responded? We posted our written questions, and all candidate responses unless the candidate requested otherwise. Happy Voting! 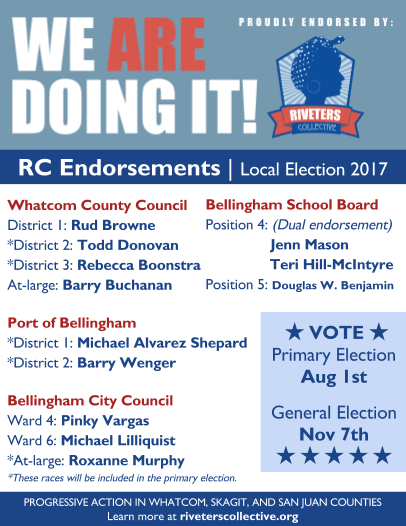 Source: RC Member and the Center for Biological Diversity

Suggested Script: Hi. I oppose cutting $7 billion to the Department of Housing & Urban Development. I believe in an America where we take care of each other. I am happy to see my tax dollar support people who rely on housing programs like Section 8. I’m most upset that these cuts would give tax breaks to America’s richest. I would like [name] to oppose efforts to cut HUD funding and instead support Americans trying to succeed.

Suggested Script: Hi, I’m from [ZIP] and want to express my concern over possible cuts to the Department of Education’s budget. With environmental dangers and global competition, we can’t risk the next generation to being poorly educated. Teachers need excellent training and support. College graduates need relief from debt. Can you tell me what is [name] doing to support education for all of America’s kids and fight cutting the Dept of Education budget?

Additional Information: Read this article from the Minnesota Daily, and this one from The CT Mirror.

Background: This great list of actions from @joekatz45 details four things you can do to oppose Trump’s ban on transgender people in the military.

Bonus: Donate to Lambda Legal to defend the rights of LGBT Americans.

Advocate for Bipartisan Cooperation to Fix the ACA

Description: Advocate for bipartisan cooperation to fix the ACA.

Suggested Script: Hi. I’m from [ZIP] calling to express how releived I am that the ACA was not repealed last week (say why). I would like to see [name] work collaboratively with both parties to fix what’s broken in the ACA so that healthcare stays affordable without sacrificing coverage. Can you tell me if [name] is committed to bipartisan cooperation?

Link to the Riveters Collective Calendar

Every Monday: Attend a vigil hosted by C2C and Keep Bellingham Families Working. A vigil will be held from 11:30a.m.-12:30p.m. in front of City Hall until Aug. 28, 2017 or from 5:00-6:00p.m. at the WTA downtown bus station. Support undocumented and immigrant families to live in safety and dignity in our community. Come together and join in building power in people!

Friday, Aug. 4, 2017 from 7:30-11:00p.m.: Attend the opening day reception and screening of An Inconvenient Sequel: Truth to Power at Pickford Film Center, 1318 Bay St., Bellingham. A decade after AN INCONVENIENT TRUTH brought the climate crisis into the heart of popular culture, comes the riveting and rousing follow-up that shows just how close we are to a real energy revolution. Former Vice President Al Gore continues his tireless fight, traveling around the world training an army of climate champions and influencing international climate policy. The premier reception will begin at 7:30p.m. and the screening will start at 9:00p.m. with a Q&A panel to follow.

Saturday, Aug. 5, 2017 from 5:00-8:00p.m.: Join us for Community to Community Development’s 4th annual Summer Social Justice Celebration and Outdoor Benefit Concert with The Elopements and Ebb, Slack, and Flood in Boundary Bay Brewery’s outdoor garden space at 1107 Railroad Ave, Bellingham. The event is open to all ages, and the suggested donation is $10-30. Visit the RC calendar page or Facebook for more information.