The Riveters Collective is doing it! We have ONE goal for the 2018 campaign season: FLIP THE 42nd DISTRICT by increasing voter turnout with a proven strategy.

We will go door to door to ask low turnout voters to pledge to vote. They fill out a postcard promising to vote, we mail it back to them so it arrives with their ballot. The front of the postcard recommends voting for RC-endorsed candidates (Pinky Vargas, Sharon Shewmake, Justin Boneau, Eric Richey and Carol Frazey), initiatives (Yes On 1631, No on I-1634, and Yes on 1639) and the Bellingham Home Fund.  Research has shown that pledge to vote campaigns are more effective than traditional get out the vote strategies, and no other local campaign is targeting infrequent voters. Our goal is to turn out 2,000-3,000 votes that would not have otherwise been cast. Our postcard will include our voting recommendations so that these votes go to our candidates.

Riveters Collective is the only organization doing this work in the 42nd. These are votes that otherwise wouldn’t show up in this election and they could be the difference between winning or having Doug Ericksen (and Vincent Buys and Luanne Van Werven) back in Olympia. This will bring the turnout we need to win. We expect to spend $21k on printing, postage and staffing for this effort.

Want to volunteer?  Send us an email at riveterscollective@gmail.com, we’ll be in touch in September.

Thanks to Becky Kurle at Liet Unlimited for design work.  We now have tens of thousands of these beauties on hand. 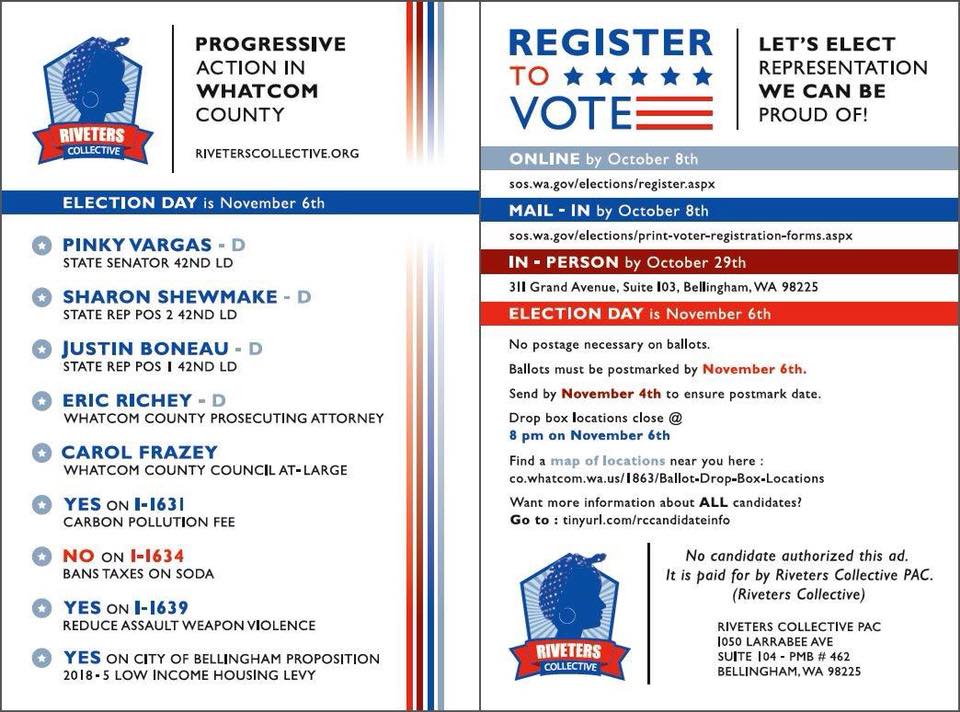 ***UPDATE: When we initially published this post, we had two goals, the second being to prompt the PDC to clarify that childcare is an allowable campaign expense.  Since we planned our campaign season activities, the PDC added this to their guidelines!  Given that this goal is now met, we will focus entirely on flipping the 42nd district.***