Civic spaces should be welcoming and safe for all members of our community, and the Riveters Collective is committed to systemic change toward this goal.  Campaigns – as pop-up, temporary, high-intensity workplaces – are especially vulnerable to abuses of power. In 2018, the Riveters Collective PAC Pledge to Vote Campaign followed the lead of Tim Ballew II’s campaign for state senate (led by Tim Ballew II’s 2018 State Senate campaign, written by Tim’s field manager, Michael Peñuelas) in requiring all campaign workers sign a code of conduct, and in designating external reporting contacts.

In 2019, implementing a code of conduct will be a prerequisite for any campaign to be endorsed by the Riveters Collective. To make this easy for campaigns, we’ve provided a model code. We will accept a campaign’s code of conduct provided it meets the following criteria.

After countless doors knocked, donations tallied, texts sent, and vote after vote sought, pledged and returned, and so many races yet to be called, there’s only one thing left for the board of directors to say to you, the Riveters Collective.

Thank you for your time, your efforts, your voices, and your bravery.

Thank you to every person who ran for office—who braved campaigning and forums, who earnestly listened to a cacophony of differing opinions, and made the choice to offer your leadership to our community. No matter the outcome of your race, thank you for your willingness to serve.

Thank you to all who served on our endorsement committee and gave hours of your time vetting candidates, not to determine who was the most enigmatic choice, but to determine the candidates you believed most capable of accomplishing the goals of the Riveters’ platform.

Thank you to everyone who sat still and listened. Who paused to examine their own privilege, had uncomfortable conversations, and read and learned and discussed new views on intersections and identity.

Thank you to everyone who knocked on doors and made calls and sent mail (both e- and snail) to their fellow voters and our elected representatives. Thank you for holding our government officials accountable. Thank you for helping to crush turnout records. And thank you for inspiring so many others to join in our work.

Two years ago, in the wake of an election that shattered so many of us, the seeds of a movement were planted in our ever-fertile Northwest corner of Washington. Riveters was born out of moxie and collaboration, when a group of ordinary people—women, parents, perfectly average individuals—stopped waiting for those in power to fix things. Although so many of our members would still consider themselves unremarkable, together we’ve accomplished the exceptional, simply through our commitment to doing the work at hand—work that too many of us have neglected for too long.

It’s work we’ve not done perfectly, with plenty of missteps and painful lessons learned. There have been times when we’ve been blind to our privilege and had our edges painfully stretched. We’ve experienced a taste of the personal attacks that too often are directed at any woman in the public sphere. We’ve learned, we’ve grown, and we’ve persisted.

In these election results there are wins and not-wins, and lots of continued nail-biting and challenges to act upon. But what we’re building is not an event or a single election, it’s a habit. It’s an acceptance of our responsibility to one another and the world we live in. We’re reclaiming our space in civic life.

At our election celebration, board member Marissa McGrath quoted Henry Rollins and said “The only thing worse than complacency is complacency.” With all that you’ve made happen these last weeks, months and years, we know that as a community and group, we’ll never be complacent again. So today we celebrate our wins and grieve our losses, and then we get back to the practice of civics. There’s a platform to revise, a candidate bench to build, and so much more to do to nurture our community and democracy. However, one thing is abundantly clear: however much work there is to do, we ARE doing it.

Thank you for all that you do.
The Riveters Club Board of Directors

These are our recommendations for Whatcom County voters in the 2018 general election.  Want more information on ALL candidates? We’re updating this (linked) document with everything we find!

How did we decide who to endorse?  We thought you’d never ask!  Click through for more information. 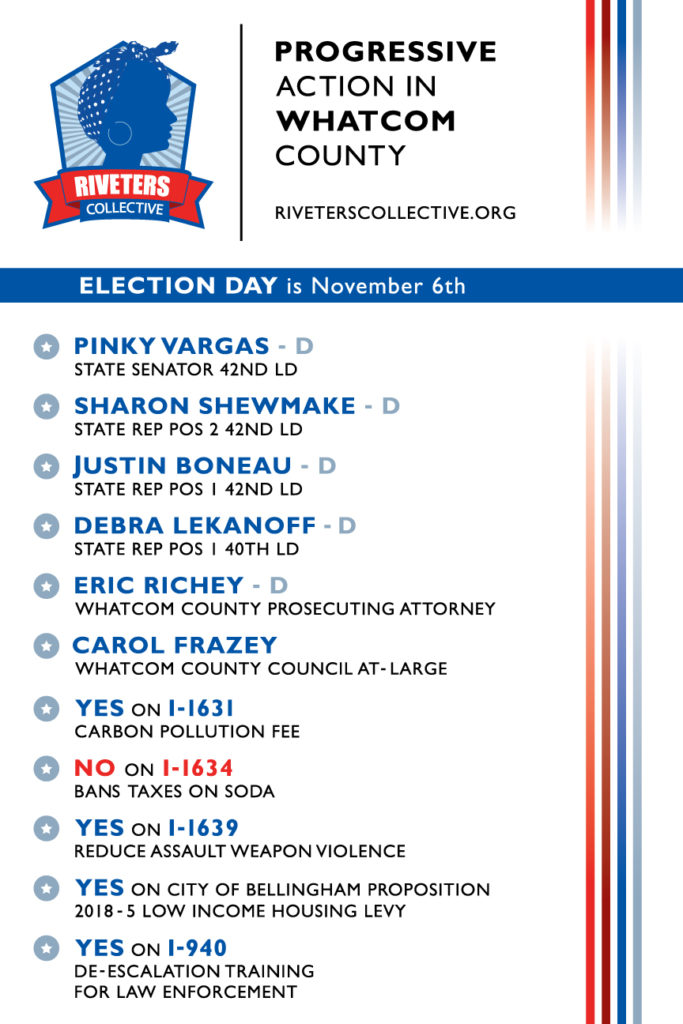 YES on I-940 – de-escalation training for law enforcement

The Riveters Collective is doing it! We have ONE goal for the 2018 campaign season: FLIP THE 42nd DISTRICT by increasing voter turnout with a proven strategy.

We will go door to door to ask low turnout voters to pledge to vote. They fill out a postcard promising to vote, we mail it back to them so it arrives with their ballot. The front of the postcard recommends voting for RC-endorsed candidates (Pinky Vargas, Sharon Shewmake, Justin Boneau, Eric Richey and Carol Frazey), initiatives (Yes On 1631, No on I-1634, and Yes on 1639) and the Bellingham Home Fund.  Research has shown that pledge to vote campaigns are more effective than traditional get out the vote strategies, and no other local campaign is targeting infrequent voters. Our goal is to turn out 2,000-3,000 votes that would not have otherwise been cast. Our postcard will include our voting recommendations so that these votes go to our candidates.

Riveters Collective is the only organization doing this work in the 42nd. These are votes that otherwise wouldn’t show up in this election and they could be the difference between winning or having Doug Ericksen (and Vincent Buys and Luanne Van Werven) back in Olympia. This will bring the turnout we need to win. We expect to spend $21k on printing, postage and staffing for this effort.

Want to volunteer?  Send us an email at riveterscollective@gmail.com, we’ll be in touch in September.

Thanks to Becky Kurle at Liet Unlimited for design work.  We now have tens of thousands of these beauties on hand. ***UPDATE: When we initially published this post, we had two goals, the second being to prompt the PDC to clarify that childcare is an allowable campaign expense.  Since we planned our campaign season activities, the PDC added this to their guidelines!  Given that this goal is now met, we will focus entirely on flipping the 42nd district.***

We have a cheat sheet for you! Click on the image below to download a shareable image for social media. 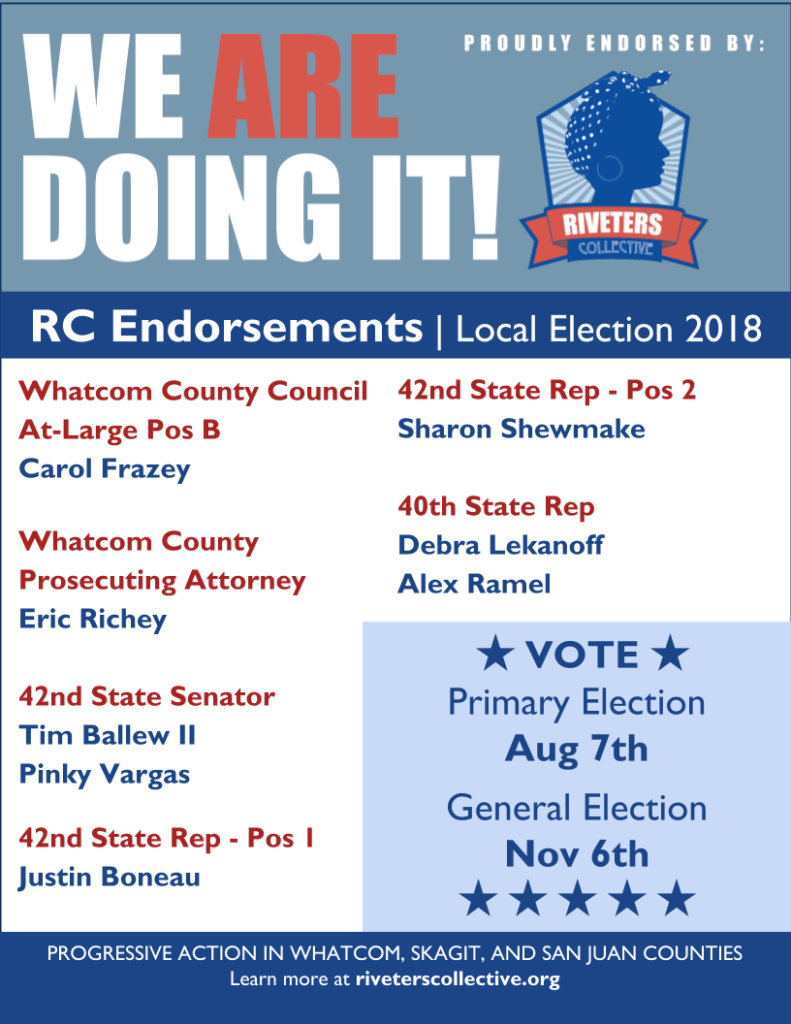 Want to know a little more about these candidates and why we chose them? Click here to read their questionnaire responses, along with the responses of several other candidates whom we interviewed.

Click here to view our candidate info sheet for all local candidates.

Click here to view a summary of the endorsement committee’s impression of each candidate who sought our endorsement.

Our endorsement process is underway! This is one of the main ways that our collective shows solidarity with a specific candidate or issue. In other words, an endorsement is our way of saying “Hey, we like your vision for our community, we want to align ourselves with the actions you will take to achieve that vision, and we respect the way you conduct yourself as a candidate.”

In that vein, we think it’s important to be clear and open about our zero-tolerance policy for some behaviors. These are behaviors that will automatically disqualify a candidate from being eligible for, or may result in the withdrawal of a Riveters’ endorsement.  If a candidate or affiliated campaign employee, consultant or volunteer:

Click through to view our 2018 endorsement questionnaires.  Many thanks to the hard work of our all-volunteer endorsement committee!